31 Years of Memories from Farmer Johns

Early Memories: The weeds, the picking, the cleaning, the loading, the hauling, the unloading, and the broken pumpkins from bouncing down I90 to LaCrosse. Not having enough pumpkins to fill the last order in Austin and needing to buy 500 in LaCrescent to bring back. The pick your own decision was made.

The First Field Trips: We charged by the size pumpkin each child took-weighing on a baby scale in the field, making change, etc. My demonstrations were given off the end gate of my pickup. The kids sat on the cement and played with the sand and dirt. Later we moved into the tin shed with a dirt floor-kids found more dirt and the walnuts falling on the roof and rolling to the ground were very distracting. 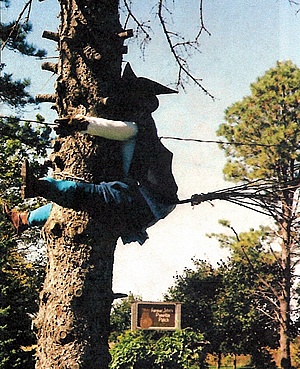 The Pumpkins: There were two varieties-Connecticut Field and Atlantic Giant.

The ghost was purchased at Lytmysl for 5 cents about 20  years ago.

The witch hit the pole long ago.

The Animals: Our Chocolate Lab Aune had annual litters of puppies. We provided a "give away a puppy" opportunity and gave away the puppy while the first child was home getting Dad's permission. Broken hearts are awful.

The goat that walked around the yard eating my displays. The rabbits being harassed by our dogs. The pony, ducks, chickens, kittens given to us "with ring worm", we only heard of one child victim.

The Weather: The ice storm and days with snow.

The KAAL TV weather live at the patch.

Two wagons stolen in 2014 and one returned thanks to Facebook.