The Healthy Choice...See us at Farmer's Market Place
Monday and Thursday 4-6pm and Saturday 9-12 at Oak Park Mall
Season: 3rd Monday in May to the end of October Rain or Shine 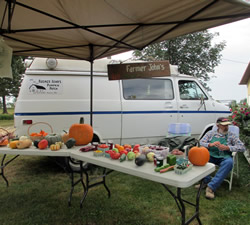 Gardening and fresh food were always a part of our life. While living in Pammel Court at Iowa State, John and Jan had a garden next to the golf course.John would take his hoe and golf clubs to play #1 and #18 before bringing home the fresh veggies. After returning to Austin, the over production from the gardenwas sold at the Farmers' Market around the court house in Austin. Cattle feeding was discontinued in 1986 and our energy was directed to provide more fresh vegetables for the Farmers' Market and to begin a pick your own strawberry and raspberry patch.

After 25 years Kirk and Mary now go to Farmer's Market Place market in Austin every Monday and Thursday only. We are also at the Albert Lea famers market on Wednesdays and Saturdays. Kirk's mechanical skills have made the growing of cucumbers and peas a more pleasant task as he made many feet of trellises. Mary's artistic senses create wondful displays of the produce they provide from mid-May to the end of October. Jan continues to make the jam they sell which is also available at the pumpkin patch.

No insecticides or pesticides are sprayed. Some weed control is accomplished with herbicides. 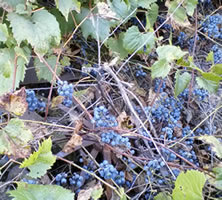 The woods, the fence lines and the garden produce an abundance of ingredients for Farmer Jan's creative jams and jellies. The most popular has been the raspberry jalapeno, followed by green pepper; both addictive when served on crackers with cream cheese. Others like them as a glaze for pork and chicken..
Wild grapes, elderberries, wild blackberries, wild plums, along with currants, rhubarb and strawberries are harvested and used fresh or frozen to make such jams as Rhuberry, Jazzberry, Plum Grapeful and even Traffic Jam. These are now challenged by Straw-Benaro. 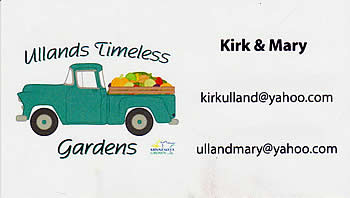 What's In Season for Your Table or Freezer:

Asparagus begins as soon as the ground warms in April and continues to July 4.

Rhubarb is picked from the end of April until it freezes.

Canning tomatoes-must be ordered and usually most available in late August and September.

Raspberries usually July 4 to July 25 and September 10 to freeze.

Guide to Availability at the Market or Farm